The Future of Us Book 16 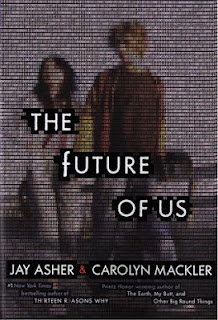 In 1996, Emma and Josh stumble onto their future facebook accounts, and find out what will be happening in their lives in 15 years.

This was a really good story, and it's a real love story. Emma and Josh were best friends before the book started then something happened to make things awkward between them. But they are still there for each other. This isn't a book of gushing romance like Twilight, but it does have a HEA, even the HEA you're waiting for the whole time.When I finished the book, I just thought it was a more realistic love story, because it's all the ups and downs that make them so strong.
This is an interesting read with alternating narrators who actually sound like two different narrators. This impresses me, because I think usually, you have to rely on the names at the top to know whose head you're in.
But I don't remember the 90's being that archaic. I have to say I'm from a poor town, and from the poorest neighborhood in that town. And even there in 1996 every kid in my class had used a computer and knew the basics of the internet. I think a lot of people still didn't own computers, but A LOT of people did. The only other thing I didn't like about it was that there is a subplot involving Emma's best friend Kellan that is never resolved. I really want to know what happened with that, and with the way this book ended I'm not expecting a sequel. So I will never know!
Posted by Beth at 6:01 PM

Email ThisBlogThis!Share to TwitterShare to FacebookShare to Pinterest
Labels: Jay Asher, The Future of Us