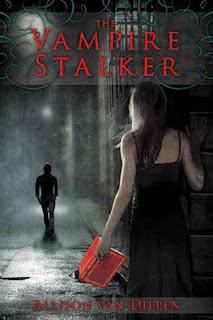 "What if the characters in a vampire novel left their world--and came into yours?

Amy is in love with someone who doesn't exist: Alexander Banks, the dashing hero in a popular series of vampire novels. Then one night, Amy meets a boy who bears an eerie resemblance to Alexander. In fact, he IS Alexander, who has escaped from the pages of the book and is in hot pursuit of a wicked vampire named Vigo. Together, Amy and Alexander set out to track Vigo and learn how and why Alexander crossed over. But when she and Alexander begin to fall for each other, Amy wonders if she even wants him to ever return to the realm of fiction."

I read this whole book in a day! It was that good. I can remember being skeptical about things a time or two, but never enough to put the book down. I enjoyed this book from the first page to the last page. The concept is fresh for YA paranormal which in a saturated market is nice, and I liked the characters too. I felt all the characters were well rounded and believable. I even found the paranormal concept believable, and I love the term "literary physics." In truth, the romance was not as strong as I usually like, but the story was solid enough that I didn't mind. This is four stars!
Posted by Beth at 7:25 AM