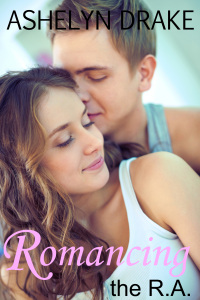 "Noelle Buckman is looking forward to making a fresh start in college, one that doesn’t involve immature high school boys. The second she steps on campus for freshman orientation, she can sense the possibilities. Especially when she spots Andy, a resident advisor who’s not just hot but also thoughtful enough to open doors for a girl.

And Andy has his eye on Noelle. Even when her nerves take control and she thinks she comes off as a hillbilly with no direction, Andy can see what she’s really like and he’s more than a little interested.

But orientation is less than two full days and there’s an entire summer between Noelle and Andy. Will her attempt to romance the R.A. be as short-lived as college orientation?"

I really liked this novella! It was cute, short and sweet. It was really funny in places too, almost like a romantic comedy. I don't read much NA because I like to keep things PG-13, but this story was not graphic at all. Noelle was a shy freshman trying to come out of her shell and learning to push boundaries at college. (And boy did she succeed at that). Her friend Julie was one of my favorite parts of the book. Julie said what she thought, and brought in a lot of the humor. Andy, the R.A. was great too. He was a straight shooter, but still managed to be light and carefree. Overall this was a light story. A chick-flick if you will. I deducted a star, because Noelle made a decision that really bothered me. More than that, she had just said she didn't want to be the girl who did that kind of thing then did it. I'd planned to deduct two stars for this, but the ending was SO CUTE it made my heart jump which made it impossible for me to give this book anything less than a 4 star rating. Although, I do wish it had been a full length. There is nothing wrong with it as written, and I'm so behind on everything I'm appreciating novellas right now, but I think I would have liked to see more of these characters and this relationship. The next book in this series is Julie's and I'm kind of looking forward to it, since she was one of my favorite characters.