Thoughts on the Lightkeeper 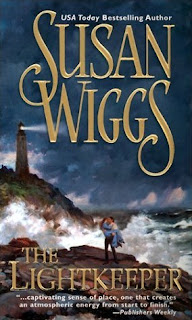 "When his pregnant wife dies in a shipwreck, Jesse Morgan gives up his wealth and place in Seattle society. He relegates himself to a tiny community where he dedicates his life to protecting others from the ocean. As keeper of a remote lighthouse along a dangerous coast in the Pacific Northwest, Jesse rejects all social contact so that he can brood about his loss. When the sea tosses up a beautiful pregnant woman, the lone survivor of another shipwreck, Jesse finds he has a second chance at life and love.
Mary Dare is an outspoken Irish woman who takes poverty, single motherhood, and death in stride. She brings vitality, passion, and joy to Jesse's life and forces him to face his guilt and unhappiness. Mary's honesty and compassion transform Jesse, and together they find beauty in a simple life."

The best thing about this story has the be the setting. It is another character in the book and adds to the conflict. (At this point, I think the Pacific Northwest must be amazing because one of the few other books I've said this about is Twilight also set in Washington state.) The other strength of this book is the complexity of some of the supporting characters. I loved the Icelandic couple and how Wiggs used them to weave folklore into the story to foreshadow the plot. I also loved the old lady who set up a house for struggling strangers. And it was a sweeter romance.
But you know my thoughts on books are rarely one sided, so I have to get to what didn't work. Everything else. Jesse is just not the kind of hero I can fall in love. And there were moments when I couldn't blame him, because Mary was that annoying. He found her on the beach, saved her life, and let her stay in his house. And she acts like she owns the place. She has certain expectations of him and their relationship (something that only exists because he saved her from death) which she has no qualms making clear. It comes across like "You saved me, now you have to marry me." WTF. Really. For a moment, I actually hoped she would die in childbirth. I thought taking care of a baby would give Jesse what he needed and I didn't like Mary.
Posted by Beth at 12:46 PM

Email ThisBlogThis!Share to TwitterShare to FacebookShare to Pinterest
Labels: Susan Wiggs, The Lightkeeper