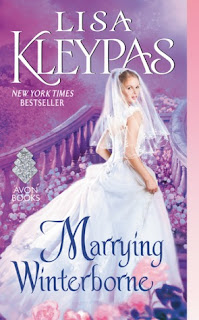 "A ruthless tycoon
Savage ambition has brought common-born Rhys Winterborne vast wealth and success. In business and beyond, Rhys gets exactly what he wants. And from the moment he meets the shy, aristocratic Lady Helen Ravenel, he is determined to possess her. If he must take her virtue to ensure she marries him, so much the better…
A sheltered beauty
Helen has had little contact with the glittering, cynical world of London society. Yet Rhys’s determined seduction awakens an intense mutual passion. Helen’s gentle upbringing belies a stubborn conviction that only she can tame her unruly husband. As Rhys’s enemies conspire against them, Helen must trust him with her darkest secret. The risks are unthinkable… the reward, a lifetime of incomparable bliss. And it all begins with…
Marrying Mr. Winterborne"

Wow. Just wow. Okay. I can breathe now. So this is not clean romance. My clean romance fans, I apologize. But wow. I loved it. I didn't expect to and I would have liked to see fewer and less graphic sex scenes, but the romantic tension was exquisite. Rhys would do anything for Helen and she loved him as much. I usually prefer sweeter romances because in mainstream romance the sex usually becomes the action and there is less focus on the romance. I think the sex and the romance got equal play here (and as I've said for my tastes that wasn't neccessary) but it did nothing to take away from the romance and in a way added to it.
Helen discovers she is the daughter of Rhys's biggest enemy and is advised that it would hurt him to know. Still, she doesn't want to keep a secret/lie to him. And then she learns she has a little sister which she can't expect Rhys to care for. So she plans to go away alone and raise her younger sister. Rhys is a good man, and given his birth to a poor Welsh family and the way people look down on him in spite of him being self made and rich, I thought concerns of his thoughts on her birth were overplayed. And Rhys did not let me down!
It's not my typical book, but I picked up the first in the series today.
Posted by Beth at 1:22 PM