In case you haven't seen it yet, my friend Kelly & I are co-hosting the sweets blogfest. We'd love it if you signed up. It's a good way to learn about sweet romances, and if you happen to write sweet romances of course you can promote your book ;)!

Okay, so I'm breaking my own rules today. As you know, I know longer do reviews just recommendations. My policy is I'll only recommend something I'd rate 4 stars or higher. I probably wouldn't have given this book four stars based on the ending, but I'm still recommending it. Hey, my blog. I can do what I want. 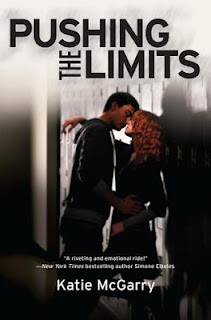 "No one knows what happened the night Echo Emerson went from popular girl with jock boyfriend to gossiped-about outsider with "freaky" scars on her arms. Even Echo can't remember the whole truth of that horrible night. All she knows is that she wants everything to go back to normal.But when Noah Hutchins, the smoking-hot, girl-using loner in the black leather jacket, explodes into her life with his tough attitude and surprising understanding, Echo's world shifts in ways she could never have imagined. They should have nothing in common. And with the secrets they both keep, being together is pretty much impossible.

Yet the crazy attraction between them refuses to go away. And Echo has to ask herself just how far they can push the limits and what she'll risk for the one guy who might teach her how to love again."

That blurb does not lie! These kids are both in impossible situations. They both have faced things in their short lives that it is going to be hard if not completely impossible to overcome. And with their whole lives ahead of them, the stakes are high. They need to overcome their situations. There were lots of things about this book, that I really loved. I can't say much more about the concept, because I think you should experience it firsthand, but that was one thing I loved. Most of the characters are strong well rounded and believable--(I'm willing to say all, but I'll get there later). I loved Echo & Noah, and several other characters, but I didn't like Echo's dad and stepmom at all.

Both Noah & Echo navigate their way through their situations by the end of the book, and the book left me thinking about them and wishing for more. The writer did an awesome job at characterization, world building, and evoking emotion. I said I wouldn't rate this at four stars because *SPOILER ALERT* I didn't like the truce Echo made with her dad and stepmom at the end of the book. For me, she let them off easily. Her dad had an affair with her babysitter and then married the girl. He's already lost my respect. He repeatedly chooses his very young wife over his daughter, and that does little to gain my respect back. The stepmom is oblivious and self-centered. (Then again, she'd have to be to have an affair with a married man). I would have liked to see them make more of an effort at a truce than the other way around. And after the stepmom's comment that the new baby meant "She'd have a brother again," I could not accept her being okay with them naming that baby after her brother. Noah's ending was beautiful, the romantic ending was satisfying though I would have liked an epilogue. I just didn't like the resolution to Echo's family situation.
Still, I highly recommend this book and will definitely read the next one.