Cover reveal for THE BOY WHO LOVED FIRE, by Julie Musil

Genre: YA contemporary with a splash of ghosts 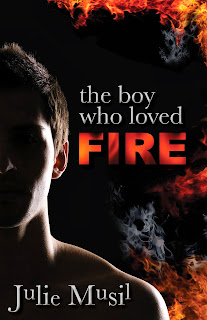 Manny O’Donnell revels in his status at the top of his high school food chain. He and his friends party in the mountains on a blustery night, sharing liquor and lame ghost stories around a campfire. The next morning, as a wild fire rages in those same mountains, Manny experiences doubt. He was the last of the drunken crew to leave the cave, and he’s uncertain if he extinguished the flames. Within hours, he becomes the number one arson suspect.

As he evades a determined arson investigator, Manny, a modern-day Scrooge, is visited by ghosts of the past, present, and future. He’s forced to witness the fate of his inadvertent victims, including Abigail, the scarred beauty who softens his heart. Manny must choose between turning around his callous, self-centered attitude, or protecting his own skin at the expense of anyone who gets in his way.

Julie Musil, author of YA fiction, is a chocoholic and obsessive reader. As the mother of three teen boys, she’s immersed in teen speak, drama, and gym socks. She loves to chat! Connect with her on her blog, Twitter, or Facebook.