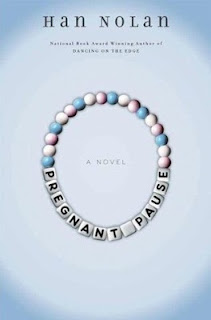 I bought this book, because there was a blurb that said something about a pregnant 16 year old wasn't sure she loved the man she married. With the question about whether she loved her baby's father, I thought this might be a romance. I kind of half expected it to be some fairy tale where life is hard for two teenagers who created a kid, when they're really still kids themselves but everything works out in the end. I wasn't discouraged by this. I love fairytale endings, especially since they rarely exist in real life.

I was wrong on every count. This is not a romance, though it does have romantic elements. Really, Ellie's life sucks. She was kind of forced into marrying her boyfriend who is just a couple of years older than her by their parents. And he's a jerk, and loser with a capitol "L." He could care less about their baby or his wife. He's never around and when he is, he's just a jerk. There is another guy who is flirting with Ellie. He seems like a better guy and she's interested in him. But she really wants things to work out with her husband. Besides, things aren't always what they seem. And more than her romantic problems is the fact that her husband's parents want her baby. Her sister wants her baby. She doesn't know if she wants to give it up.

Things get worse when her baby is born with a problem. All the sudden, the guy that wanted her is no where to be found. Her sister is on a plane before she's out of the hospital. Her husband is nowhere to be found and his parents aren't interested in a sick kid. Her parents refuse to help her with the baby. They'd rather be working with AIDS orphans in Africa. She's jobless and homeless with a baby. She thinks she's going to be forced to put her special needs baby up for adoption and doesn't know what will happen to it.

I don't usually read outside of romance, but I thought this was a really good book. It was a very realistic look at teen pregnancy, and the voice held my attention. I found myself unable to put it down several times, because I needed to know what happened next. I'm not sure I can say that about any other non-romance. And if I had a teenage daughter, I'd want her to read this, because this guy kind of talked Ellie into doing things she didn't want to and ruined her life in the process. (I don't mean just the baby, she got in trouble for other things because of him lots of times).
Posted by Beth at 5:13 PM