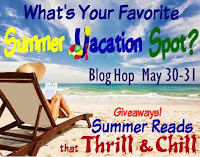 I'd originally planned to set secret novel in Vegas, somewhere I know. But I realized there were some problems there. Vegas is an interesting place for two characters who need to stay hidden to be--it's not as big as you might think--and many of my loyal readers are used to my books being set in the South. I searched for a city closer to home I might be able to set this story in. It needed to be a place known for scandals and partying but easy enough for a Texas runaway to make it too. I realized quickly I was looking at NOLA or Shreveport. I pitched the concept to my husband and let him tell me which city worked better. We agreed on NOLA. Now I just have to get there somehow.
Posted by Beth at 8:25 PM 4 comments:

The Big Dreams Blogfest is hosted by Misha Gericke and myself.


The past couple of months have been hard for me, which is why April didn't get posted. The school I worked for had budget cuts and because I was the last one hired, I got the cut. Thanks! But this is complicated because I'm teaching on a probationary license, so if I don't find a job by August, I won't get my license! I've done a lot of work for my license and paid a lot of money. But that's okay. We all know the MC has to succeed after 3 failed attempts, because after that the reader gets bored (and imagine how the mc feels). So August is my time lache (a technique often used to up the pressure on the mc) and I've had two interviews which will either result in a job or my first two struggles. So it will be okay.

I'm not working off funnel marketing. Hope will have a relaunch in July, so I'm working on a prequel to make available for free. My goals for June are to finish Before Hope Dawned, make a solid outline for my thesis novel, survive MFA residency and find a job.

What are your goals this month?
Posted by Beth at 5:11 AM 4 comments:

Daughter of Smoke and Bone Trilogy 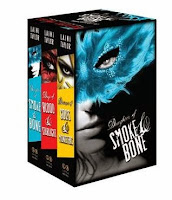 "From master storyteller and National Book Award finalist Laini Taylor comes a sweeping and gorgeously written modern fantasy series about a forbidden love, an ancient and epic battle, and hope for a world remade."

Ordinarily, I would review each book separately, but this time I felt it would best to handle the trilogy as one. Why? Well, because it's really one story.

I originally picked Daughter of Smoke and Bone up for a book club. I couldn't get into it, so at 8% I gave up and started reading something more interesting. It was a requirement for my MFA this year, so I started re-reading. I didn't get interested until about 25% in. I originally assumed this was because it wasn't a romance, but I know writers from other genres who also couldn't get into the story before that point. At 50%I was REALLY hooked and glad the book was required, because I wouldn't have made it that far any other way. (Shows the importance of opening pages). I stayed up all night reading it--loving it. Until the end. Bam! Which really was no ending at all. Instead, it set up the next book. I was annoyed but I started reading the next book. After all, how else was I going to know what happened to this angel/devil love story? The next book started of awesome. I mean it picked up exactly where the first one left off and there was all sorts of angst and I'm loving it until this chick did something so stupid it didn't even make sense. She offers a flimsy explanation for it, but it doesn't hold up against any kind of logic. Still I keep reading. So we get to the end of the second book, and there is more of an ending this time. And it's still pretty good and the promises of romance are HUGE. HUGE! So of course, I buy the third book which is where things start to fall apart. All of these promises of angel/devil romance and the book opens with Eliza. Who is Eliza? Well, your guess is as good as mine cuz she hasn't been in the book before now. And at first I'm thinking Eliza just some passerby seeing the apocalypse and this is just to give us some perspective on what this all looks like from Earth. Nah. Eliza is actually going to become a central character. In the last book of a trilogy where her name has never been mentioned before. And Eliza has issues and brings them to the page. Because I made it through two books of fights to death without ever really having to say "Oh gross!" but when I got to the part about her fingernails being ground to powder for communion bread... Well... OMG Gross! All I wanted from this third book was spooning and kissing. It's a forbidden romance, remember? Instead, I've got some chick making communion bread from her fingernails. Wow! Just wow! As I'm writing this, I'm only 65% into the third book, so I may update it later. I do believe the third book will tie up loose ends, I just wish it could have done with the characters we started with, and maybe more kissing.
Posted by Beth at 12:00 AM 1 comment:

Email ThisBlogThis!Share to TwitterShare to FacebookShare to Pinterest
Labels: Daughter of Smoke and Bone 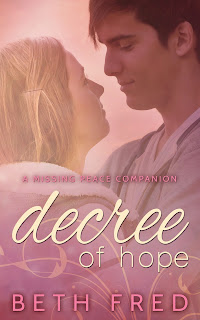 So I've mentioned Finding Hope was getting a face lift and name change. I'm so excited to show you guys the new cover. And it's going to be in print!!!! 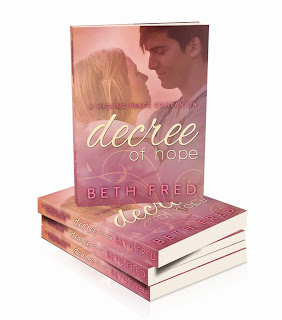 Email ThisBlogThis!Share to TwitterShare to FacebookShare to Pinterest
Labels: A Missing Peace, Decree of Hope

Not too long ago, I read Susan Kaye Quinn's Indie Author Survival Guide. I found much of her advice helpful but ran screaming at the prospect of a five year marketing plan like she recommended. Why? Because I HATE marketing. I hate everything about marketing. When I decided to take up writing, I pictured myself alone with my laptop, the sound of my fingertips hitting the keys filling the air. I never imagined I'd be #retweeting people on Twitter or responding to fb comments. I didn't even know what these things were. I like signing. I always say they're like a nerd girl's rock show, but those are becoming harder to book and less productive. So how could I create a five year marketing plan? More daunting than that, the thought of marketing for five years made me not want to write.

Then I found Write.Publish.Repeat. There is a whole section on "funnel marketing," a term I'd never heard before. Simply put, funnel marketing is using a free product to funnel sales into a paid product. I knew the benefits of sampling, and from experience I knew it worked. When The Other Marlowe Girl was released, I made The Fate of A Marlowe Girl  available for free. That coupled with Reader's blog tour, put TOMG on amazon's inspirational best seller's list for a while. And it really isn't even inspirational.

Since then I've paid for blog tours, twitter parties and an assortment of other things. Nothing worked. Not to mention, I hated it. I'd rather be writing than doing just about anything else. Write.Publish.Repeat said that if you're releasing a series, your funnel product is obviously the first in the series. But what about stand alones? The authors suggested creating a short story or novella to help sell a stand alone. I felt so stupid for never thinking about this before. The idea of writing a prequel to sell existing products had never crossed my mind. I have two goals: 1) make a million dollars writing 2)write a million words. Part of what drives me insane about marketing is that I'm wasting precious time on something that doesn't seem to be fulfilling either one of these goals. The reason that the term "funnel marketing" immediately caught my attention is because it's writing. I'm writing to market writing. Assuming, it's ineffective as a marketing strategy those words still fulfill one of my goals. They will get me to a million words quicker.

But... my next thought was I have to package books (you're funnel product is a REAL product and needs to be professional) that I have no intention of making money off of. But then I realized I could spend up to $80 on a cover and still come out significantly cheaper than all the other marketing tactics I've tried. And there is more potential for this to work. The people you're marketing to are already interested in you or the story, so you're essentially marketing to a soft audience. You just need click through.

And now I have a five year marketing plan. It's all caught up in my funnels.
Posted by Beth at 10:15 AM 3 comments: 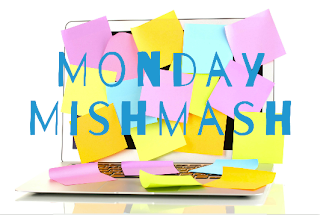