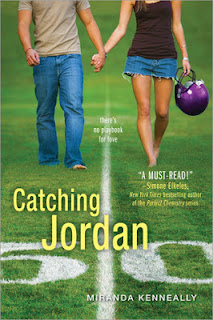 "What girl doesn't want to be surrounded by gorgeous jocks day in and day out? Jordan Woods isn't just surrounded by hot guys, though-she leads them as the captain and quarterback of her high school football team. They all see her as one of the guys and that's just fine. As long as she gets her athletic scholarship to a powerhouse university.

But everything she's ever worked for is threatened when Ty Greeen moves to her school. Not only is he an amazing QB, but he's also amazingly hot. And for the first time, Jordan's feeling vulnerable. Can she keep her head in the game while her heart's on the line?"

This book has a voice that stands out from page 1. The characters are well-rounded, although they were hard for me to relate to, because I'm so not a football playing kind of girl. And I'm not really into jocks either. Still, the characters were likeable and there was more going on than just a romance plot. Jordan had issues with her NFL star dad too, because he didn't really want his daughter playing football. This is a love triangle, and it becomes obvious pretty early on that it will be, but it's well developed. And well played. This book was a page turner. I think I read it overnight and I'm home all day w/ a five month old who is in to everything!

There were a few things I didn't like. Lots of kids casually hooking up. Some people say this is realistic, and I saw one reviewer who said this was more realistic than teens having sex b/c "I'll love you forever." Unless, this is your first stop, you know me well enough to know I disagree. I guess it may be more realistic for some people, but my response would be that probably depends on the teen. Also, Ty threatens to break up w/ Jordan unless she's going to be "mature and serious" about him, so I'm not sure he thought it was more casual than love. The other thing I didn't like: Ty. OMG! This guy was so annoying. He was whiney, insecure and controlling, and while these may not be great qualities in a girl they're worse in a guy! Promise.He tells her to be friends with and what to do. He demands she "pick up the phone, when I call," and his excuse for all of it is he lost his parents. But these things were more preference than craft.

I give this book a four star rating. If you like YA contemp romance, you will love this.