My friend Tara is here today to celebrate her book Ride for Rights, a YA historical about a girl with a bike. 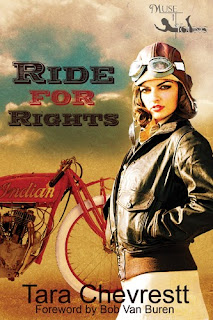 Blurb:
In the summer of 1916 women do not have the right to vote, let alone be motorcycle dispatch riders. Two sisters, Angeline and Adelaide Hanson are determined to prove to the world that not only are women capable of riding motorbikes, but they can ride motorbikes across the United States. Alone.

From a dance hall in Chicago to a jail cell in Dodge City, love and trouble both follow Angeline and Adelaide on the dirt roads across the United States. The sisters shout their triumph from Pike’s Peak only to end up lost in the Salt Lake desert.

Will they make it to their goal of Los Angeles or will too many mishaps prevent them from reaching their destination and thus, hinder their desire to prove that women can do it?

Excerpt:
There was a twinkle in Francisco’s eyes as he looked the women up and down, taking in their dirty riding attire and the motorbikes behind them.
“We are just moving some of our caballos and mules to a more desirable location,” he said smoothly. “You must be the famous sisters riding to Los Angeles and getting into muchas problemas!” He laughed boisterously and, turning to the conversing men waiting on their horses and mules behind him, said something in Spanish to them all. The men began laughing and slapping their thighs with their large hats.
Angeline didn’t like this and stepped forward. “What are you saying?” she demanded.
Francisco gestured for his men to be quiet. “I read your American papers. You are quite famous. You brought trouble upon a man with many wives.” He shook his head and raised his hands in the air as though in supplication. “More than one espousa. Por que?  Hombre loco!”
The men behind him roared their approval once again. Finished with his antics, Francisco turned a serious face to the women in front of him. “Crazy man, I say. One woman is enough.” He held up a single digit. “Any more woman than that, and I would be drowning in my José Cuervo!”
The men behind him began yelling amongst themselves, and Angeline had no idea what they were saying but decided it sounded rather bawdy and thus related to women and a man named José, and it seemed harmless enough. The men looked dirty and disheveled, and she noted they carried weapons, but the man called Francisco was smiling and did not seem to intend them harm, so she permitted herself to relax.
Adelaide was quite charmed by this foreign man in front of her. She liked his smooth movements and the way he spoke with a twinkle in his eye. She also liked the idea of being famous. She asked the man to tell her more about what he had heard.
“You are representing women, yes?” Francisco asked them. “You aretropas and rebels!”
“Well, I don’t know what a tropa is, but I suppose you could say that.” Adelaide blushed again. Angeline was watching from the corner of her eye.
“Tell me more.” Francisco placed her hand in the crook of his arm. “Maybe we can help you.” He gestured to his men to dismount, and they all rushed to obey, pulling saddlebags off their horses or mules. “We have food and water and José Cuervo.”
Angeline was looking around for this mysterious José they all seemed to worship so, but no man in particular seemed to respond. She shrugged and reluctantly followed Francisco and her sister as they walked. The men obviously under Francisco’s command were all resting on their colorful bedrolls and chatting, occasionally looking in their direction in curiosity.
She caught up to her sister and new companion and grabbed her sister’s free arm, forcing her to stop her chattering and turn around. “We really should be going. We must reach the next town before dark,” she said in a warning tone.
Adelaide’s eyes were bright with excitement, and her cheeks were flushed. “Francisco says we will not make the next town before dark. He says we may join him and his men when they set up camp.”
“Absolutely not!” Angeline hissed, glancing discreetly at Francisco who was now directing orders at his men. “What has gotten into you?  We are two women alone surrounded by strange, foreign men! Do you have any idea what could happen?”
“Mujures, I assure you no harm shall come to you. Here…” Francisco came up to them and pressed a Colt dragoon into Angeline’s hands, “for your safety.”
The dragoon was heavy, and she struggled not to show surprise or dismay. She had never shot a weapon. She attempted to exhibit a confidence she did not feel as she looked Francisco in the eye. “Why?” she asked defiantly. “Why do you want us to stay with your camp?”
“My men and I would love the company. We have been traveling for days with nothing but ourselves, our horses, our smelly mules, and José for company. We will not harm you, but I will not stop you from leaving if wish you wish to do so.”  He gallantly bowed once again.
A camp was being set up near a formation of rocks, and the men were unpacking cooking utensils as Angeline looked at the setting sun. She sighed. They had wasted too much time. She did not want to get lost again.
She looked at the dragoon in her hand, and its weight reassured her. She looked at a hopeful Adelaide and nodded her consent at Francisco. They would camp one night, but if any of the men bothered her or her sister, she was putting this dragoon to use even if it meant shooting her own arm off.

Tara Chevrestt is a deaf woman, former aviation mechanic, dog mom, writer, and editor. You’ll never see her without her Kindle or a book within reach. As a child, she would often take a flashlight under the covers to finish the recent Nancy Drew novel when she was supposed to be sleeping. 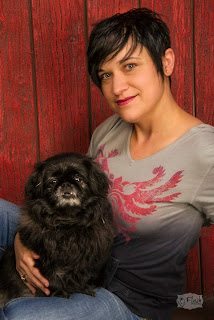 Tara is addicted to Law & Order: SVU, has a crush on Cary Grant, laughs at her own jokes, and is constantly modifying recipes and experimenting in the kitchen. Her theme is Strong is Sexy. She writes about strong women facing obstacles—in the military, with their handicaps, or just learning to accept themselves. Her heroines can stand alone and take care of themselves, but they often find love in the process.
You can connect with her on Facebook or follow her blog
Posted by Beth at 5:26 AM