First of all, I'm sorry I haven't been around much. Life is crazy right now! I probably won't be around the way I usually am until September. I'd like to say I'm so busy doing stuff to launch my book, but the truth is it's not that. We're moving back to Texas. (I'm currently in Wisconsin). It's a 1200 mile move! With a one year old. In a car. for 19 hours.

Now that that's done big news today.  I have the cover and official synop for my debut YA novel A Missing Peace. I'm giving away a $10 gift card, and I'm announcing a blogfest Catherine Stine and I are hosting in August. 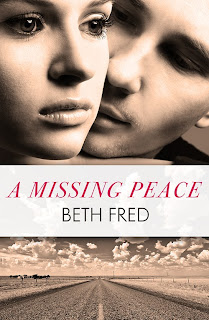 A turbulent, emotionally charged YA novel that breaks down barriers and challenges the status quo...
Angry, seventeen-year-old Iraqi war refugee Mirriam Yohanna hates her new life in Killeen, Texas, where the main attraction is a military base, populated with spoiled army brats like Caleb Miller.
Caleb has much to be angry about too, including Mirriam who turns him down flat in front of everyone. Eager for retribution, Caleb agrees to a dare that will see him take Mirriam to the prom and regain his pride. But their relationship soon moves beyond high school antics. Mirriam and Caleb are bound together by more than location, and as they are forced to work closely together on a school assignment, they start to uncover an explosive story that has the potential to ruin lives — and both of their futures. One single truth changes everything and strengthens their bond.
When Mirriam's family discovers their relationship, they decide it's time to arrange her marriage to a proper Iraqi man. Caleb must convince Mirriam that he is in it for forever — or risk losing her for good.

And that brings me to the International Potluck Blogfest. There will be cool things up for grabs including another $10 Amazon gift card. You can promote your book during the blogest. The rules are simple post our image (available later) and a recipe or book from anywhere in the world. The ideal post would combine both. Sign up with the linky.
Posted by Beth at 7:30 AM