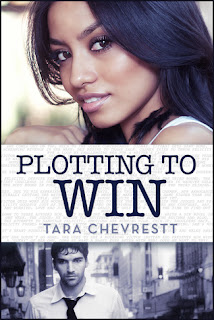 First off, for people who love me for my clean romance reviews--this isn't PG-13 because of language and Victor's preoccupation with that part of his body male characters tend to be preoccupied with. (No joke, it was referred to more than once). So this might not be your thing. But the romance never got hotter than a kiss.

I think what I liked most about this novel was the concept. I've said for years I wish there was an American Idol for writers and that's exactly what Plotting To Win is. I think it's closer to America's Next Top Model, but still I loved that. The voice took me a minute to get used to, but once I did it was a pretty smooth read. I loved the descriptions of the writing cave and some of the challenges the contestants had to go through. But sometimes I thought people who were chosen as contestants for this show would have been a little bit more knowledgeable about the industry than some of them were. The characters are all well developed and the book is an easy read. However, I didn't like the way that Victor and Felicity kind of pegged each other as major competitors right off the bat based on attraction. Victor went so far as to try to get a bed closer to her to throw her off her game. Then again he did spend a lot of time thinking about a bodily appendage, so that might have just been a ploy to get closer to her. And on the romance front something happens in an epilogue that I think would have been better in a final chapter. All in all, I'd rate this about 3.5 stars for my blog followers. I'm of two minds. 4 stars based on the book and 3 stars because I'd like it a little bit cleaner, so taking the average 3.5
Posted by Beth at 7:36 PM