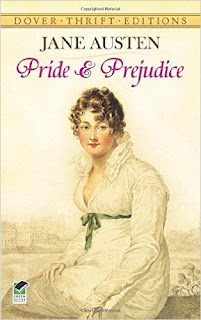 "In a remote Hertfordshire village, far off the good coach roads of George III's England, a country squire of no great means must marry off his five vivacious daughters. At the heart of this all-consuming enterprise are his headstrong second daughter Elizabeth Bennet and her aristocratic suitor Fitzwilliam Darcy — two lovers whose pride must be humbled and prejudices dissolved before the novel can come to its splendid conclusion.
A selection of the Common Core State Standards Initiative."

This is a classic required for my MFA program, and I'm a writer. You're expecting me to say I loved it. I can't. I won't.  Ironically, I read this in 2010 and apparently didn't review it--probably because I was embarrassed to admit that I didn't like it--but I did rate it. I gave it the same 3 stars then that I will give it today.
Last week, when I started reading it, I found it an easier read than when I read it in 2010. I thought for this reason the extra years of writing and reviewing would make me view it more favorably, but I still think it was just okay.
You see in the synopsis that Elizabeth and Darcy are at the center of this story about five daughters needing to be married off. Lots of the story follows Elizabeth's older sister Jane and her suitor, who for at least half the book have more chemistry than Elizabeth and Darcy. The subtext shows attraction on Darcy's side but Elizabeth's oblivious to it and hates him. Some of these encounters were humorous, so I can overlook that. Two things made this a hard book for me to like. The first is the massive amount of author intrusion. She literally tells the reader what to think, which is telling not showing. But more than that it's invasive. The author voice is distinct from Elizabeth's voice and jolting. In fairness, this was a common technique at this time. And I haven't seen a book yet I liked it in. But I also found this book to suffer from a sagging middle. This time I read this on a Kindle. I was bored until about 50%. From 50%-58% it was absolutely captivating, a page turner. Then it got dull again until about 94% where it kept my attention until the end. Except that the last chapter was entirely authorial intrusion.
But it's a classic. It's "stood the test of time," and part of me can't help but wonder if that is because people keep assigning, thus other people have to keep reading it. Still, since it is a class and so many people do seem to enjoy it, I feel compelled to link to a five star review.
Posted by Beth at 12:00 AM