Last week I launched my future-noir serial, Debt Collector. I've been in love with obsessing about writing this serial since the idea struck me mid-January. Here we are, two months later, and I have four episodes written, one published, and I'm excited about taking this three-month journey across nine episodes with my readers, as  I  we create this series. In the end, I will bundle the season, so that readers who prefer all-at-once-reading to read-as-you-go, can enjoy the series as well. I take all comers! :) Before I embarked on this journey, I had a myriad of questions: how many episodes? How often? How long/short should the stories be? How does this whole "episodic storytelling" work? And most importantly: does anyone actually read these things?

Must Read TV Let's answer the last one first.

People are actually VERY familiar with episodic storytelling via TV. We watch everything from self-contained series like Law&Order and House to broad-story-arc series like Lost or Heroes. Some like the week-by-week suspense of Must Watch TV; others would rather wait until the season is done and get it from netflix so they can watch it back-to-back.

Ok, that's TV. What about books?

Ebook serials are a new thing, because ebooks are a new thing - but serials have been around since Charles Dickens wrote and released Great Expectations (self-published through his own literary magazine!) in 6k "installments" every week for nine months. Readers today aren't accustomed to reading in serial format because publishing serials was restricted to magazines, which were missing two key factors: 1) wide circulation (most magazines don't have it), and 2) a paying market (many ezines are free, and many paper magazines don't pay much for content).

Enter ebooks: low cost of transmission and access to a wide circulation. They're a natural for shorter works. At first, authors dusted off their short stories or wrote new ones... and sometimes those thrived. But for the most part, readers raised on novels craved longer works and more in-depth stories... which made serialization the next natural step. How Long? How Many? How Often?  Sounds like a smexy ad for... okay, we're keeping this PG. :)

Authors are experimenting like crazy right now with serialization. I've seen releases 1 week, 1 month, and 1 quarter apart. Number of episodes range from 5 to 15, length of episodes ranging from 6k to 40k. Forty thousand words! That's... a novel, people. (Note: SFWA defines a novel as 40,000+ words, which is about 160 pages.) So you can see that experimentation is all over the map.

I'm convinced none of that matters, with the slight caveat that the most successful serials to date have released every 1-3 weeks. Who Are The Successful (Indie) Serials? (note: trad-pub authors are also experimenting... see John Scalzi's Human Division)

Hugh Howey's Wool 5 episodes in first set (Wool) - total 530 pages first released as a single, then episodes 2-5 released over 3 months Episodes range from 50 pages to 250 pages (the last one was novel-length) 3 episodes in second set (Shift), 230-280 pages (this is really a trilogy of novels)

Third set (Dust) will be released as a single book

Hugh Howey's serial started as a short story, but he listened to reader demand and wrote more. RaShelle's Fairy-Tale-Turned-Vampire stories brilliantly captured the wave of demand for both those genres. Platt & Wright's post-apoc tale does the same. But all are successful because readers were drawn into the story, not because the format has some special pixie dust that made them successful. The only caveat is that readers can sample a series by trying the first episode or two - if they're hooked, they keep coming back. But as authors, this cuts both ways - readers can also stop buying the next installment at any time.

Once again: it's all about story. If readers like it, they will return. Which is why serialization is not the easy way out (see below).

Can I Sell My Novel In Pieces And Make More Money?

A serial is not a chopped up novel, just like a TV episode is not a chopped up movie. It's a different way of telling stories. In a way, it's more demanding than novels - you need to immediately draw the reader in, you have to reach some kind of reader-satisfaction-level by the end of the episode (even if you have a cliff-hanger), and you have to maintain that pace and storytelling arc over multiple episodes. You can pre-write all your episodes (and some people do), but the successful authors above all wrote-as-they-went, listening to reader feedback along the way.

Serials are the Advanced Ninjitsu of storytelling.
Serials are not the way to make easy money.
Serials are not a short-cut to getting your work out.
Serials ARE a new, exciting way to bring readers closer into the storytelling process and engage them in the creative process.
It's the hardest, best, and most fun writing I've ever done. 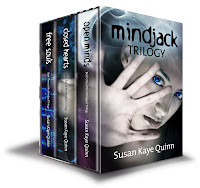 Susan Kaye Quinn is the author of the bestselling YA SF Mindjack series. Her new Debt Collector serial is her more grown-up SF. Her steampunk fantasy romance is temporarily on hold while she madly writes episodes to keep Lirium (the titular Debt Collector) happy. Plus she needs to leave time to play on Facebook. Susan has a lot of degrees in engineering, which come in handy when dreaming up dangerous mind powers, future dystopias, and slightly plausible steampunk inventions. Mostly she sits around in her pajamas in awe that she gets make stuff up full-time. You can find her at www.susankayequinn.com What's your life worth on the open market? A debt collector can tell you precisely. Delirium (Debt Collector 1) is now available on Amazon, Barnes&Noble, Kobo, iTunes, Smashwords
Posted by Beth at 5:47 AM