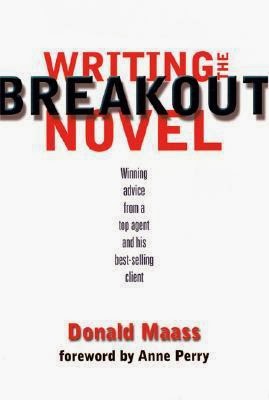 "Maybe you're a first-time novelist looking for practical guidance. Maybe you've already been published, but your latest effort is stuck in mid-list limbo. Whatever the case may be, author and literary agent Donald Maass can show you how to take your prose to the next level and write a breakout novel - one that rises out of obscurity and hits the best-seller lists.
Maass details the elements that all breakout novels share - regardless of genre - then shows you writing techniques that can make your own books stand out and succeed in a crowded marketplace.
You'll learn to:
establish a powerful and sweeping sense of time and place
weave subplots into the main action for a complex, engrossing story
create larger-than-life characters that step right off the page
explore universal themes that will interest a broad audience of readers
sustain a high degree of narrative tension from start to finish
develop an inspired premise that sets your novel apart from the competition"

If you've followed me for a while, you know I don't review many craft books. But I have to read four this semester and figure I might as well get blog content out of it, so you'll probably see a few more. Writing the Breakout Novel didn't have that conversational, easy to read tone and voice that King's On Writing or Debra Dixon's Goal Motivation Conflice: The Building Blocks of Good Fiction had (the only two other craft books I've been able to make it through cover to cover). But even if I weren't reading this for a class assignment I would have finished. It was that helpful. The blurb above says it's good for a newbie to someone mid-career. I disagree. I think for someone who hasn't completed several manuscripts this book would be overwhelming. But it is excellent for a mid-career writer. And that's my primary reason for reviewing it. It's so hard to find helpful information that goes beyond what we already know, what's free in the blogosphere. Maass defines mid-career as someone with a few titles out not getting the kind of deals or exposure they want. I'm going to define mid-career for anyone who has written more than three or four manuscripts. (Decide,  for yourself if your mid-career you're more familiar with your work than I am). Once you've gained an understanding of your genre and how to write a well structured manuscript this book has some great thoughts on taking it to the next level. So much so that sooner or later I'll post a crash course on what I learned.

Does that mean I agreed with everything in the book? Absolutely not. Maass recommends playing with structure and not using formulaic plot structures. And playing with structure very very very rarely works. If you want to do it go for it. Just know it works best in literary fiction (which Maass uses interchangeably with "mainstream" and I don't think there is anything mainstream about lit. fiction) and that you pretty much have to be a genius to pull it off. Overall, I give this book 4 stars, and I recommend anyone pursuing a career read this (after three manuscripts).
Posted by Beth at 8:30 AM