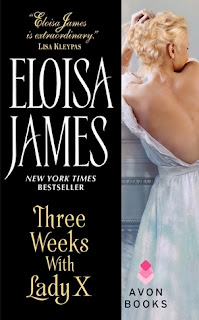 So I've been trying to figure out how to get started with the blog again after my extended absence. I've decided I'm going to let you follow along with my MFA. My writer friends will benefit from this without paying the $7100/semester that I am, and readers might find a few things interesting.

My MFA program works like this: every semester starts off with a residency where a lot of writers from different genres (YA, Romance, Horror, Sci-Fi/Fantasy, Mystery, and Children's Literature) come together for a week to work intensely on specific elements of craft. That week always begins with a chat about a specific book chosen to hopefully pacify people from different genres. For our January residency the book is Three Weeks with Lady X.

"Having made a fortune, Thorn Dautry, the powerful bastard son of a duke, decides that he needs a wife. But to marry a lady, Thorn must acquire a gleaming, civilized façade, the specialty of Lady Xenobia India.Exquisite, head-strong, and independent, India vows to make Thorn marriageable in just three weeks.But neither Thorn nor India anticipate the forbidden passion that explodes between them.Thorn will stop at nothing to make India his. Failure is not an option. But there is only one thing that will make India his—the one thing Thorn can't afford to lose...His fierce and lawless heart."

My Thoughts
I enjoyed the book, but I can't see why this was chosen for the residency. I don't think it has a lot of cross-genre appeal. It was a historical romance, which was fine for me because I love romance. I love the title. It makes the book sound racier than it actually is, and in the times we live....
So when I read it like a romance:
I immediately like the attraction between India and Thorn, and I knew it would go somewhere. I would have liked more emotion from Thorn sooner, and even India a couple of times. They're sneaking around together, and he's still trying to marry this chick and is telling her about it. And once or twice I felt like she should just knock on his door and then when his butler called him, slap him in the face, and leave. *Shrugs* I would have. But when his best friend decides he's interested, Thorn is finally ready to make a commitment. It just might be too late. I thought the author created urgency for me to read on, and I loved both characters as they each had a sympathetic backstory.

Have you read Three weeks with Lady X? Do you feel it had cross-genre appeal? Did you love the romance?
Posted by Beth at 12:00 PM