My blog buddy The Golden Eagle is celebrating her 2 year blogoversary (I've followed her for most of this time), and she's hosting The Evil Genius Blogfest today to celebrate.

Because as usual, truth is scarier than fiction the evil genius of my choice is Adof Hitler. 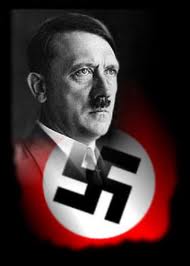 Best known for his systematic annihilation of six million Jews, Hitler rose to power by making a scapegoat of his own demographic. No doubt, it takes talent to convince a majority one group is to blame for all of our problems and please overlook that I'm part of this group. This evil genius is truly evil and if not a genius fairly close. Hitler doesn't get enough credit. He started the first anti-smoking campaign and waged a war on the world that killed fourteen million civilians. We spend a lot of time talking about the six million Jews, but tend to ignore that he systematically eradicated the disabled, the mentally ill, and anyone else he could find to target. But we got lucky. This evil genius got arrogant and got stupid. He decided to cross Russia in the middle of winter. (Hitler, that was a bad idea). A move that would lead to his eventual defeat.
Posted by Beth at 4:02 PM