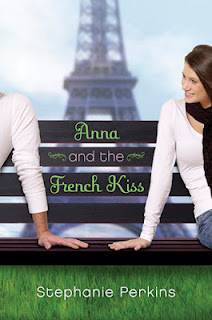 Anna's parents (it's her dad's idea, but mom goes along w/ it) send her to boarding school in Paris her senior year. Anna's angry about it, because she wanted to spend her senior year at home, misses her family and her friends, doesn't speak French, and didn't have any choice in the matter. Her first night there she meets Meredith(Mer) who instantaneously becomes her best friend and Mer lets Anna in her group of friends. (Now, this is rather ideal. I started college away from home what would have the second semester of my junior year and it did not go that easy)! Leaving Mer's room, Anna bumps into a hot guy, Etienne. He's looking for Mer, so she knows he's off limits. The next day he's at breakfast with Mer and her friends, and they invite Anna to join in. Etienne orders for Anna because she doesn't speak French. And the story begins to unfold.

All of the characters in this book were extremely well true to life. Well rounded would be the technical term, but I like "true to life" better because I think it describes the way you have clear visual images of these characters and what they're doing at any given moment. Anna is not the overly altruistic YA heroine. She's somewhat self centered but still cares about other people--human. Etienne is not a perfect hero either, but that's what makes him appealing. And all of the secondary characters were just as well developed. The voice is interesting and engaging. I couldn't put this book down, but at the same time I was annoyed that it was taking Anna and Etienne so long to get together and found a million places where they should have gotten together. That's my only real complaint with the book--it just took too long for them to get together and got to the point where they should just decide to be together or quit talking already. I liked the ending. This was a cute book. It's probably the best contemp I've ever read, but I think I'm still more of a paranormal kinda girl ;).

What have you read lately?

Reminder: You can win $25 for the book depository here.