A picture is worth a 1000 words is being hosted by Charity at Unicorn Bell. The goal is to let one of several pictures inspire a short story of 1000 words or less.


We'd gone to some remote village for vacation. Not much of a vacation. There was absolutely nothing to do. Desperate to get out of that one room log cabin—well, two rooms if you count the bathroom—I headed out the door walking the dirt path. I could only go one direction unless I wanted to battle grass and weeds and God knows what else.
“Don't go far,” Mom called from the door.


“K.” Seriously I was eighteen. I could go as far as I wanted to. I couldn't even remember why I let her talk me into spending spring break in the middle of nowhere anyhow.


I walked as fast as I could away from that stupid little cabin. It didn't take long before I had to make a decision. I could turn back now and let mom teach me how to cook on an “open fire” or I could follow my now narrowing dirt path into an opening in the forest.


But it wasn't long before the dirt path ran out completely and vine overtook the tree. I had to be careful where I stepped. There were branches and bits of dried wood and vines springing up from the ground in every direction. I kept my arms as close to my body as possible, because they were starting to get scratched up.


It was time to turn back, and I did. But after forty-five minutes I still hadn't found my dirt path or seen light from the opening in the forest. At this point, I thought I might be walking around in circles, but I couldn't be sure. Green stuff all looks the same to me.
Then it happened.


It popped its oblong head out of the grass, its beady little eyes fixated on me. If its eyes hadn't been so round and white, I would have never noticed. After all, it was the same color as the grass.
When I was five years old, my mom made me go to girl scouts. It didn't really work out. I was allergic to the uniform. I broke out in hives, and stripped naked before we ever made it outside. But I remembered one thing. When you saw a snake you we're supposed to slowly step back and scream "Snake," so someone could help.

I took a step back screaming, “Snake,” the whole time. I took another step back. My foot hit something behind me. The next thing I knew I was flipping through the air, then I came crashing down.


I struggled to stand. I wondered how far away the snake was. I had to get out of here. But I couldn't get myself into an upright position. Pain radiated from my right arm like someone was trying to yank it off my body. And I felt something wet on my forehead. I moved my arm to feel my head and then I screamed out in agony. Moving the right arm was a bad idea. So I stayed there on the dirty wet forest floor crouched on my knees not knowing what to do. I brought my left hand up to touch my forehead. Blood. Lots of it. It was on my cheeks now too.


So I couldn't stand up. I couldn't move my arm. There was a snake. I wasn't sure where or how far away. I didn't know how to get out of this forest and I had a concussion. I drug my body to the trunk of the nearest tree and situated myself so I could lean against it. I prepared to die here in all this greenery. I closed my eyes hoping I could sleep through the pain.


I opened my eyes to find Prince Charming. No really, knee high boots, leggings with a sword and all. He could clear the brush for me. He could carry me out of here. Maybe I could live! Plus, he was hot.


He leaned down and picked me up like my weight was nothing.


Then that little demon popped its head up again. “Snake,”I screamed.


Prince Charming chuckled. “Oh that—that's just a grass snake. It's harmless.” He kicked the snake with his boot and sent it flying away from us.


The clearing Prince Charming took us out of faced a highway. A real highway with four paved lanes. In the grass that between the highway and the forest, I found other people dressed like Prince Charming. I pointed to a beautiful girl in a brocade dress. “Is that your Cinderella?” I asked.


So I broke two bones and bloodied my head outrunning a garden snake. But Prince Charming's real name is Matt, and he's pre-med at the U in town. Mom likes my new college plans, because I'll only be four hours from home. But Matt and I know we don't wander beyond the paved roads. 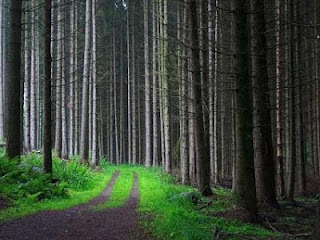