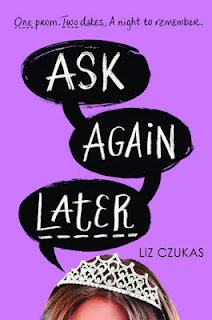 Author Liz Czukas is here to show off the cover of her book Ask Again Later coming from Harper Teen in 2014.

"Despite what her name might suggest, Heart has zero interest in complicated romance. So when her brilliant plan to go to prom with a group of friends is disrupted by two surprise invites, Heart knows there's only one drama-free solution: flip a coin.

Heads: The jock. He might spend all night staring at his ex or throw up in the limo, but how bad can her brother's best friend really be?

Tails: The theater geek...with a secret. What could be better than a guy who shares all Heart's interests--even if he wants to share all his feelings?

Heart's simple coin flip has somehow given her the chance to live out both dates. But where her prom night ends up might be the most surprising thing of all..."

1.  It is hard work!  Even as a Big 6 (or is it 5 now? I can't keep track!) author, I have to do my part.  There's a lot to think about, people to deal with, emails to keep up with, social networks to attend to.  People who can juggle this and another full-time job are my heroes!  Do NOT think you can drop your book into the fray at Amazon, wander away, and come back a few days later to discover you're a bestseller.  It doesn't work like that.

2.  A web designer is a beautiful thing.  My website was designed by the amazing Tessa Elwood at ipopcolor (http://ipopcolor.com/).  She not only worked fast and held my hand through every step of the hosting changes, etc., she took even the vaguest suggestions from me and made them better than I expected.  There is simply no way I could have done it on my own!

3.  You need friends!  On-line and face-to-face, there is just no substitute for getting involved with other writers.  Writers are not only readers, they know what you're going through.  Sit, listen.  You never know what tidbit you might soak up.

4.  Swag isn't an easy decision.  People seem really mixed on swag--some love it, some hate it.  I know for me, it's not a priority.  If I love an author, I want their book!  On the other hand, I've seen people go nutso over some innovative stuff at conferences and they're practically throwing elbows to get at it.  Does it equal book sales?  I don't know.  But I think you have to trust your gut.

5.  Start early!  Promoting your book cannot be done in one week before it hits the shelves.  There is a balance to be found between being a spambot for a year, and gently reminding your friends/family/followers that your book is on the way.  Aim for the latter.

6.  Don't be afraid to ask.  I have trouble "imposing" on people.  I don't like to ask for favors.  I would always rather be on the giving end than the receiving.  But that has to change when it comes to promoting your book.  It is okay to ask your writing/blogging/tweeting friends to help boost your signal.  You'd do the same for them, right?

7.  People actually want to read your book.  I know, right?  Despite the fact that I've been trying to claw my way onto bookshelves for years, I still sort of feel like I'm asking people to look at my vacation photos--torture!!  But here's the thing:  I love to read, and so do a lot of people I know.  It's only natural they'd be interested in reading something by someone they know.  Trust me, they're way more excited about your book than your blurry shots of the Grand Canyon.

8.  You don't have to go it alone!  There are plenty of groups out there for authors.  Especially debut authors.  I am a member of OneFourKidLit, and the Class of 2k14.  Both groups are all about helping their members promote together.  It's great to have other minds working on the same issues you're facing.  And fantastic to pool resources when it comes to bigger ticket items.  As soon as you figure out when you're book is coming out, look for people with similar debut dates and see what they're up to!

9.  Think outside the Internet.  It seems like we all focus so much energy on our social media networks when it comes to promotion.  But there are plenty of other outlets.  There are traditional media options, like magazines, newspapers, radio, and television if you've got the right contacts.  For people who write kidlit, like me, there are also school visits, library visits.

10.  Don't be afraid to cut your losses.  Not every promotional effort is going to pay off.  Not every method of promotion is going to speak to you.  For example, I am a terrible blogger.  I don't keep up with it regularly enough to keep readers coming back.  I just don't enjoy it.  I know it works wonderfully for a lot of people and they should absolutely go for it.  But I had to give myself permission to be a terrible blogger.  It's okay that I only put up a post once in a while when the mood strikes, or I actually have something important to share--like my cover.  Could I be forfeiting a few loyal readers who might turn into book buyers?  Sure, I suppose I could be.  But is that handful of sales worth me resenting my blog and cutting into my time that I should be writing another book?  Definitely.  Figure out what works for you and don't waste your time on the rest.
Posted by Beth at 12:00 AM