Brainstorming Help & A Give Away From Author Catherine Stine 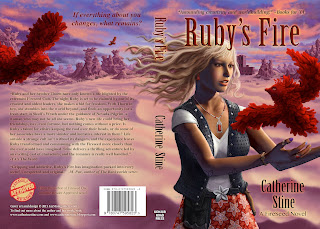 Before we get started, I'm teaching the blurb writing process that got me a 50% full request rate here starting Monday. It will be the last one for a while.

Blurb: “Seventeen year-old Ruby and her little brother Thorn, have only known a life blighted by the extremist Fireseed Cult. The night Ruby is set to be claimed by one of its cruelest and oldest leaders, she makes a bid for freedom. With Thorn in tow, she stumbles into the world beyond, and finds an opportunity for a fresh start in Skull’s Wrath under the guidance of Nevada Pilgrim, a woman who may not be all she seems. Ruby's new life could bring her friendship, love, even fortune, but nothing comes without a price. Is Ruby's talent for elixirs keeping the roof over their heads, or do some of her associates have a more sinister and lucrative interest in them? Life outside a strange cult isn't without its dangers, and the experience leaves Ruby transformed and communing with the Fireseed more closely than she ever would have imagined. Stine delivers a thrilling adventure led by an exciting cast of characters, and the romance is really well handled.”   Availabe at: ebook print

Brainstorming is one of my favorite things. Especially if I’m lounging on my deck, feet up, gazing at the clouds. I may look like I’m doing nothing, but my mind is literally storming. I explain brainstorming this way. It’s a curious, persistent voice inside you that keeps asking, “What if… what if… what if?”

For Fireseed One, the first of my YA sci-fi novels, I started with the premise that in 2089 the earth was overheated and much of the world became desert so the food source was scarce. And then I brainstormed. If the temp was super-hot, what if the arctic ice all dissipated, and the frozen underwater lakebeds melted, releasing all of the toxic methane now trapped in ice? And what if tropical oceans plants migrated north? You’d have new invasive species choking northern waters, so you’d have to grow fish, but you’d have advanced biotech, and could genetically hybridize fish with grape vines to create fish that wound up on vines in floating factories. To complete brainstorming your novel, you just keep on applying the “What if?” to your characters, your plot, and to every detail of the world.

In Ruby’s Fire, my newly released Fireseed novel, I wanted to have a female lead, Ruby, and I wanted to explore extremist cult life. I also wanted to talk about drug addiction, and what it would take for her to get off drugs. I asked the question what if she was haunted by the fact that in this cult, young girls were pledged to older men when they were very young? And what if the story opened on the night that improper relationship was supposed to be consummated? And what if Ruby was a drug addict, sniffing in her own concoction of Oblivion that she crafted from lizard venom in order to quell those horrid dreams? And what if that very drug that quieted her nightmares, in large quantity, could knock out the man who was about to assault her? What then? That, folks, is how Ruby’s Fire starts.

Will Ruby make it out of the Fireseed cult? Will she ever kick her Oblivion habit? For that, you have to read Ruby’s Fire!

Beth, thanks for letting me guest host. I really enjoyed it.