Revising to an Editor’s Specifications & A Give Away!!!

First, I need to announce that as of today I'm a M-W-F blogger! Now that that's done, we have an awesome guest post today about approaching the editorial letter.

Anna Sweet, author of The Otherborn, is here today to talk about working with an editor. Take it away, Anna.

Since OTHERBORN is my first published novel, it was also my first experience working with an editor. One I will never forget. Being with a small press has its benefits, and one of them is that the people are very approachable and communication is often swift. At least, that’s the case with my publisher and I’ve heard other writers comment similarly. For me, this translated into an easy back and forth throughout the revision process. It also meant I felt free to ask as many questions as needed, regardless of how silly I might think some of them were. I really cannot be grateful enough that this was the case. When my editor sent her initial letter, I had to read it over several times. I pretty much
kept it open on my computer for days while I worked my way through the revision process, so I could constantly refresh myself on her exact requests. My editor broke her comments down into two segments, specific issues and global issues. The specifics were little technical things that I needed to fix repeatedly throughout the manuscript. Things like formatting my em dashes correctly. Those were pretty straightforward and easy. It was the global issues that required more thought and interpretation on my part. I guess I was fortunate in that she didn’t have a ton of those for me to look at, but an example of one involved backstory. I had an info dump in an early chapter that needed to be broken
up. How to do that was left up to me. I approached the problem in two ways. First, I went through and pulled anything that wasn’t absolutely necessary to the story. Second, I inserted dialogue, so that the reflections came in small bits, and the reader was able to stay present with the story through the dialogue. I’ve since revised another manuscript according to my agents’ specifications, and that process was very similar. Some of their requests were even less concrete, and dealt with things like my character’s motivations and how they might impact the reader. It forced me to think beyond the story, and to really dig into how I wanted this book to effect others. I went back through and made mostly small adjustments throughout which fortified my main character and added a strength and depth to her she was lacking before. In both cases, there was a real give and take. I would make changes and adjustments on my own, to the best of my ability, to address their concerns, and then resubmit with an
“is this enough?” note attached. What really amazed me about both processes, was how much my opinion mattered. There were no hard and fast rules, or at least very few, and there were many times where I was invited to exert my personal preference and opinion. What I loved was the opportunity to discuss my characters with someone else who cared about them as much as I did. And I learned so much from both experiences, my writing has improved every time and I suspect it will continue to do so. I think the important thing, as the author, as the teller of your tale, is to see the revision process as an opportunity to learn and to engage in dialogue that will only benefit your work. Remember too, that you are the expert on this story. Don’t be afraid to diplomatically decline certain changes, but only when the advice has been thoroughly examined first. And as in all things, compromise is possible. It may be that the very best path to your very best book lies somewhere between your editor’s ideas and your own. 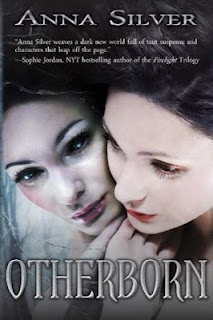 "London and her teenage friends live in a reprocessed world.

Confined within Capital City’s concrete walls, London has done the impossible and the illegal. She’s created something New- a song. But her mentor, club owner Pauly, is not impressed. Since the historic Energy Crisis forced everyone behind walls generations ago, the Tycoons have ensured there is truly nothing new allowed under the sun. Pauly warns London to keep her song to herself, if she knows what’s good for her.
What he doesn’t know is that London is keeping an even bigger secret: she dreams. And she’s not alone. London’s band-mates and friends have begun dreaming as well, seeing themselves in “night pictures” as beings from another world. As Otherborn, they must piece together the story of their astral avatars, the Others, in order to save their world from a dreamless, hopeless future.
When Pauly is murdered and an Otherborn goes missing, London realizes someone is hunting them down. Escaping along the Outroads, they brave the deserted Houselands with only their dreams to guide them. Can they find their friend before the assassin finds them? Will being Otherborn save their lives, or destroy them?" Available at Amazon. 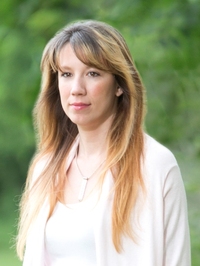 About the Author
Anna Silver is an author and artist living in the greater Houston area with her family, pets, and overactive imagination. Her art has been featured in the Houston gallery Las Manos Magicas. She studied English Writing & Rhetoric at St. Edward’s University. She's freelanced for private clients and small publications like the Hill Country Current. OTHERBORN is her first published novel. She is represented by Rebecca Podos and Nicole LaBombard of Rees Literary Agency.
www.annasilverauthor.com
twitter.com/saysannasilver