Special thanks to my friend Catherine Stine for dropping by to talk about "showing" today. Catherine is a writing instructor as well as a writer. 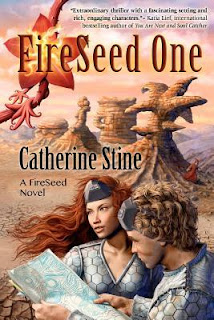 In my own writing, my students’ writing, and the literature I teach, from Collin’s fabulous Hunger Games to Kafka’s Hunger Artist, I’m always harping on the importance of “showing not telling.” When I was a newbie, if I heard that slogan once, I heard it a zillion times! Does it mean you always have to put the characters in dialog or in action, or that you can’t have exposition? No, and that’s where it gets complicated. So, let me start simply, by showing not telling.

Here are the opening lines from Collin’s Hunger Games: “When I wake up, the other side of the bed is cold. My fingers stretch out, seeking Prim’s warmth but finding only the rough canvas cover of the mattress. She must’ve had bad dreams and climbed in with our mother. Of course she did. This is the day of the Reaping.”

It’s internal monologue, which is a form of exposition, yet it tells a lot without bludgeoning the reader on the head by being too direct. We infer that they are poor and cold by the rough canvas mattress cover and because they have only one bed that they all sleep in for warmth. We know that her little sister, Prim is about to be involved in a horrid event. And we know it’s called The Reaping.

Thus to show not tell is to infer and evoke these aspects rather than say them directly. A less talented writer would’ve written: “We are horribly poor and have no heat so we all sleep in one bed. My sister’s name got put in the kitty and might be picked today for a very deadly game.”

Here’s an example from Kafka’s story The Hunger Artist, about an extreme performance artist who fasts. He’s a mistrustful character, who stays holed up in his cage 24/7 and doesn’t relate to his audience. There’s no dialog until the end, when he’s on the point of death. And then there’s a long stretch of it, including, these lines spoken to the overseer: “I have to fast, I can’t help it,” said the hunger artist… “And why can’t you help it?” “Because,” said the hunger artist, lifting his head a little and speaking with his lips pursed, as if for a kiss, right into the overseer’s ear so that nothing would be missed, “because I couldn’t find the food I liked…”

What can we infer from this passage? A lot! First of all, this is the only dialog in the entire story, and there’s a big chunk of it. Take note when a story changes in style. Also, note that the hunger artist motivates this interaction. We infer, therefore, that he’s now desperate for human communication. Kafka has a gorgeous action line in here—the HA struggling up though he’s terribly weak, and pursing his lips as if for a kiss, grazing the overseer’s ear. This is Kafka’s way of evoking intimacy through an action and through a metaphor—the kiss.

A less savvy writer would’ve written: The hunger artist was about to die, and felt desperate for someone to talk to. He whispered stuff in the overseer’s ear.

Finally, a passage from my YA thriller, Fireseed One:
I catch myself sneaking peeks at Marisa’s blue boots, a smudge of seabed mud on one from where she scraped it against her suit. It will eat into the boot; I think of brushing it off.
“Don’t make me go downstairs,” she says softly. “Let me see your father’s system; I’m good at curing computer viruses. I can unfreeze the system. This way I can show you the files.”
Femme fatale. I’ve heard of those. Is she luring me in for the attack with her soft voice? “What’s to say you won’t totally kill it?”
“Well, some virus has already done that,” she reasons. “I’ll look for the Fireseed file. The best way to explain it is to show you the video of your father.” She leans in. “Maybe you’ll join our cause. It’s more worthy than any other Ocean Dominion charity.”
“Charity!” I burst out. “Fat chance. Your cause, your evil frying cause destroyed what my father spent his whole life working on.”

Dialog is one of the best ways to show not tell! We learn that Varik doesn’t trust Marisa, but that he needs her for information. We learn he’s beginning to see her as a person though he’s resisting that. We learn that maybe Marisa has reason to help him too, but the verdict is still out, which creates tension. All without stating this directly.

Do you have any favorite show don’t tell tips? Which ones do you rely on?
Thanks, Beth for letting me guest post today!