Before we get started today, Maureen posted 5star reviews of both books here. 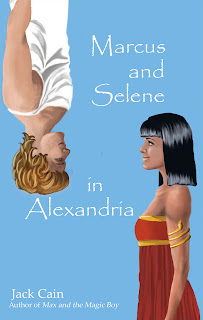 It is 2,000 years ago and Cleopatra is Queen of Egypt. She is the absolute ruler and everything she says becomes law. It is a time of great turmoil in the world. Rome has the greatest army and conquered everything in its path. Caesar has been murdered. Marc Antony is now Cleopatra’s lover.
Marcus is a Roman boy. Selene is a girl from Alexandria, Egypt, the hometown of Cleopatra. Marcus’s father is the most important Roman stationed in Egypt. Selene’s father is probably the richest man in Alexandria, and possibly in all of Egypt. They don’t like each other.
Marcus has done something very bad in Rome which made his father furious, causing him to order Marcus to leave Rome and come to live with him in Alexandria. Marcus is not happy. Marcus and Selene don’t know each other. They have never met. But they will. Soon. Their worlds will change and so will they.


a Rafflecopter giveaway
Posted by Beth at 6:43 AM